It is Monday February 4 and the countdown to the final triathlon is well under way.

Plans are now firmly in place for the final triathlon on Thursday thanks to Staffordshire Police, where the National Memorial Arboretum is located and where the fitting memorial to fallen officers and staff will be built.

However, first I have the small matter of three Olympic-distance triathlons in Aylesbury, and trying to fit them in while juggling my daily workload. Today, it is back to waking at 4am to have breakfast, work meant I didn’t make it into the pool to start the first part until 8.30am but by then I actually had the whole pool to myself for part of the swim.

Today I was feeling very tired and achey so I started calmly but built up the effort as I went and did my 1,500m in what seems now like a standard 29 minutes. Then on to the bike and I knew it would not be the fastest time as I was cycling and emailing for a short while but after being able to focus solely on the ride managed a 1 hour 11 minutes 40km. It was then on to the run and my stomach was not feeling very good at all. The 10km was interrupted by two pit stops, pushing total time out to 58 minutes but 48 for the actual run itself.

Day 97 was ticked off on the countdown chart and there are just three more to go. I was feeling tired before today’s effort and am even more so now. It is going to be hard right up to the end and without the support I receive I am sure I would not have made it this far, including anonymous donors adding to my total raised. Whoever you are, thank you! 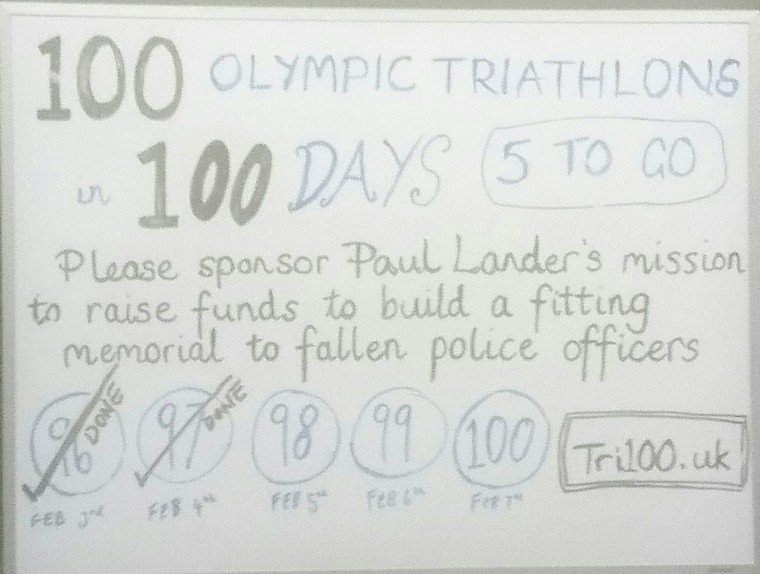 Today I paid tribute to all the police officers and staff who have died on duty on this date in the past. They are:

If you have not donated yet, please help us say a huge ‘Thank you’ to officers and members of staff who put their lives in danger every day, and build a fitting tribute to those who have made the ultimate sacrifice protecting the rest of us. Please give what you can via my Justgiving page here.