I am so close to the finishing line now so I set off for the gym this morning with the firm intention to be cautious and ensure I am in a fit state to finish the final triathlons. I am very stiff and achey so decided to take a little more care. That lasted just a few seconds as someone who I normally swim faster than was in the next lane and set off at exactly the same time. Using hand paddles he sped ahead and my competitive nature got the better of me. The 1,500m swim was therefore slightly faster than normal (28 minutes) and very enjoyable for it.

I jumped on the bike and after a short while I was joined by Hayley who was great company and I was also able to encourage her as she completed her FTP test. During the ride I received notifications of two more donations on my Justgiving page, which gave me a nice boost. I finished my 40km ride in 1 hour 10 minutes and then once again ran on the treadmill due to weather conditions (I used to hate the treadmill but am getting used to it now). A 47 minute 10km to finish, despite nearly falling off after 6km, and I have completed number 98. 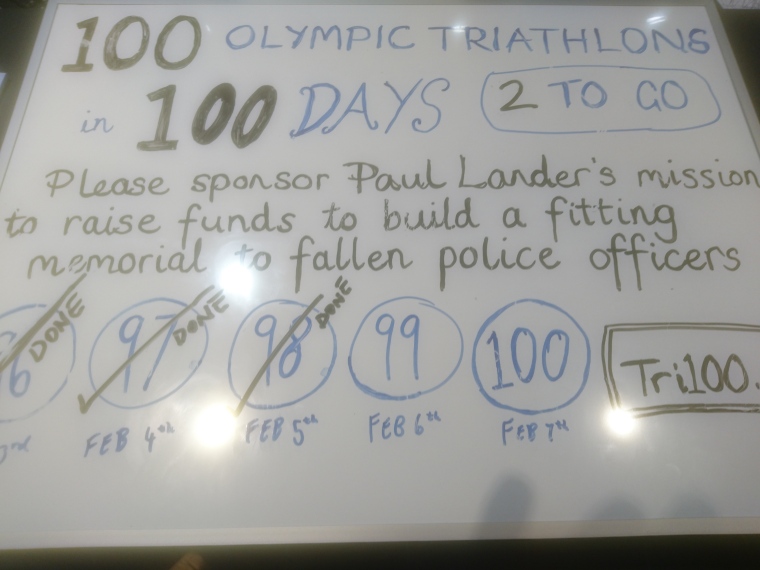 It is now probably too late to wrap myself in cotton wool so I will enjoy the efforts that remain – two swims, two bike rides and two runs. Rather than every fifth triathlon resulting in a mini-celebration, every one in these final stages feels like a major celebration.

I have just one more to go in Aylesbury before I head for Staffordshire and number 100 which will finish at the National Memorial Arboretum. That is where the memorial to fallen police officers and staff will be built once we have raised the final amount needed.

As I complete these final triathlons in my attempt to do an Olympic-distance triathlon on 100 consecutive days, please consider donating to the cause here if you have not done so already. And please share with others in whatever way you can.

Today I paid tribute to those who died while protecting us on February 5. They are: