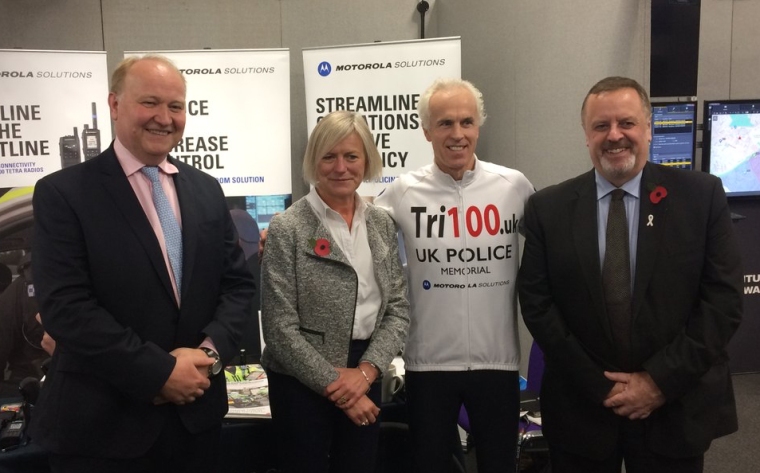 Yesterday saw the launch of my first of 100 triathlons in 100 days for the UK Police Memorial.

After I swam 1,500 metres in a pool in central London, I rode up and down the Thames Path for 40 km and then ran 10 km around St James and Green Park, although the 10 km was split into two runs of 5 km either side of the official launch above at the National Police Chiefs’ Council (NPCC) and Association of Police and Crime Commissioners Summit (APCC).

As I will every day, I paid tribute to the officers killed each day in history.

The reason I chose October 31 was because it was a very poignant and personal day anniversary for me, which I later explained.

On this day, 14 police officers were killed on duty over the last 153 years, making the ultimate sacrifice to keep the public safe. They were:

In 1914, Special Constable James Potts, of the Metropolitan Police;

In 1919, Police Constable William Madden, of the Royal Irish Constabulary;

In 1940, Special Constable Charles Bond, of the Metropolitan Police;

All gave their lives in the line of duty. That duty was to protect the rest of us.

The last officer I named, Sgt John Speed, was shot dead when he went to the assistance of a colleague who was investigating suspicious activity at a car park in the centre of Leeds at 9am in the morning.

I was on duty in the neighbouring Gipton division and was involved in the manhunt for the perpetrator.

This shocking incident made a huge impact on us all and indeed the whole city but brought home the dangers that lurk within many routine calls for service.

Those officers who died were doing the very same thing that tens of thousands of officers are doing today, such as dealing with neighbour disputes, domestic arguments, drug users and people in mental crises, right the way through to arresting violent criminals and terrorists.

I am completing 100 triathlons in 100 days to bring attention and pay tribute to the thousands who have died keeping the Queen’s peace and protecting citizens across the whole of the United Kingdom, but also to express my gratitude to the sacrifice every officer and many members of police staff make when they, without hesitation, perform their duty.

I gave thanks to the organisations supporting my challenge – the NPCC, the APCC, the Police Federation, Police Superintendents Association and Motorola, who have helped purchase vital equipment for the challenge.

Thank you to them and with the assistance of everyone I hope the whole country will say a big thank you for the sacrifices of all police officers and members of staff and we will very soon get this fitting memorial to them built at the National Memorial Arboretum in Staffordshire.